A 59-year-old Villages resident was arrested Monday on fraud and larceny charges after she allegedly swindled more than $14,000 from a 92-year-old woman she was caring for.

According to the Marion County Sheriff’s Office, the caregiver took the elderly woman to a bank in the Villages where she apparently arranged to have her name placed on the woman’s checking account. The woman allegedly told a bank official she was the woman’s daughter. 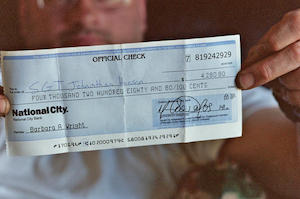 man holding a checkThe woman is quoted as saying “she did make a mistake by generating the two cashier's checks without the victim's consent," according to her arrest affidavit.

Fraud is a term that covers a wide range of offenses that are often classified as white collar crimes. Fraud crimes are usually non-violent offenses that generally involve coercing someone out of something of value, which in most cases is money. The laws defining fraud crimes can be complex, so if you are accused of committing fraud you need to act fast and seek the help of a criminal defense lawyer.

There are many different types of fraud offenses that you can be charged with, including the following:

The Villages Fraud & White Collar Crimes Attorneys at Whittel & Melton understand just how serious fraud allegations can be. Not only do these types of offenses have the ability to harm your personal life and reputation, but they can also jeopardize any professional licenses that you may hold. That is why we thoroughly investigate all the facts of your case as early as we can to help you avoid criminal charges entirely. Should your case move forward to trial, we will mount the strongest possible defense on your behalf in order to achieve the most successful outcome for your unique situation.

Our team of dedicated criminal defense lawyers in the Villages stands ready to defend you against any fraud or white collar criminal offenses that you are facing. For a free consultation, please contact us today online or call 352-369-5334. We will make sure your rights remain protected from the start of your case through its resolution.