A 39-year-old resident of The Villages, just days away from ending his conditional release from prison, is accused of a hit-and-run while driving a golf cart.

The man remained jailed Wednesday on charges of leaving the scene of an accident and violating his conditional release. 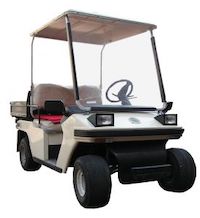 According to Lady Lake police, an accident was reported where a blue golf cart struck the rear of a vehicle before fleeing north of La Grande Boulevard. An officer at the scene apparently recovered the golf cart’s windshield and a cell phone.

The officer claims he called the last number dialed on the phone and spoke to the mother of the accused. The man’s mother told the officer her son was driving the golf cart, but was not at home.

Sumter County sheriff’s deputies arrived at the home a short time later and allegedly found the damaged golf cart. Police then contacted the accused and asked him to come to the police department for questioning.

Police claim that the man admitted he had been operating the golf cart under the influence and feared getting arrested for DUI, which is why he left the scene.

According to the Florida Department of Corrections, the man was arrested in Lake County in May 2012 on a charge of aggravated battery of a pregnant woman. He was convicted and sentenced to three years and 28 days in prison.

However, on March 20 of this year, the man was given a conditional release with a scheduled termination date in nine days.

Depending on the circumstances, a first-time DUI can result in up to 270 days in county jail, fines ranging from $250 to $1,000, an ignition interlock device installed in your vehicle for up to 9 months at your expense, 50 hours of community service, probation, DUI school, proof of liability insurance and possible vehicle impoundment for a minimum of 10 days. The State takes these charges quite seriously, and the consequences only increase if you fled the scene of an accident, caused damage to any property and/or injured or killed another person. If you have been charged with a DUI involving a golf cart or any other motor vehicle in The Villages or the surrounding areas, please take the time to speak with a Villages DUI Defense Attorney at Whittel & Melton right away by calling 352-369-5334 or contact us online. Your initial consultation with us is free, so do not delay.