Two Teens Charged in Robbery and Beating of Wildwood Man 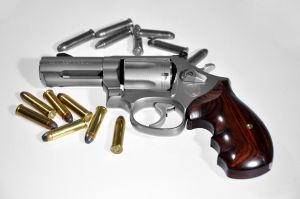 Wildwood police arrested two teens Tuesday for allegedly beating a man during a robbery attempt and barging into an occupied home to hide.

Police apparently responded to the disturbance around noon on Tuesday. They claim they found the alleged victim with a one-inch deep puncture wound in his left shoulder and the suspects' discarded gun on the ground.

The victim told police the pair had fled to a nearby home.

Police evacuated the occupants of the home and the Sumter County SWAT team was called in.

According to reports, after an hour-long standoff, members were able to convince the teens, 18 and 19, to surrender.

Both were charged with attempted robbery with a firearm, aggravated battery and possession of a firearm by a felon. They were jailed with bail set at $40,000.

According to police, the alleged victim was walking down the street when the teens approached him. Reports indicate the three had some sort of dispute before the suspects attempted to rob the man.

The teens were apparently armed and allegedly told the man to “give it up” before throwing a gun into the woods and breaking into the occupied home.

The men apparently hid in the attic of the home.

The alleged victim was taken to Leesburg Regional Medical Center where he received treatment for non-life threatening injuries.

When you have been accused of armed robbery or attempted armed robbery in Florida, you are facing very serious penalties. Robbery charges without the use of a firearm or weapon carry severe criminal consequences, but when this act is carried out with a violent weapon the sentences can increase considerably. The crime of attempted robbery can be charged if you are believed to have tried to take money or personal property belonging to another person using force, violence, threats or assault. In Florida, armed robbery is classified as carrying a deadly weapon or firearm while committing robbery.

Simply possessing a firearm or weapon during a robbery increases the charges against you. Under the state of Florida’s 10-20-LIFE law regarding robbery charges, merely possessing a firearm mandates a minimum of 10 years behind bars in addition to other penalties. Should the firearm be discharged during the course of the robbery, the minimum term of incarceration is increased to 20 years. If someone is injured or killed during a robbery, the minimum sentence can range anywhere from 25 years to life in prison.

Do not underestimate the seriousness of an armed robbery-related offense. State prosecutors pursue these crimes quite aggressively and will seek maximum consequences, regardless if this if your first criminal offense. The best possible way to avoid the maximum penalties associated with an armed robbery charge is to have The Villages Criminal Defense Lawyers at Whittel & Melton evaluate your case. We can represent your best interests, rights and legal needs related to an armed robbery charge, as well as any additional felony or misdemeanor charges you may be facing.

If you have been accused of armed robbery in Lake County, Sumter County, Marion County or the surrounding area, contact The Villages Criminal Defense Attorneys at Whittel & Melton online or call 352-369-5334.