The men, 31 and 34, face several charges, including grand theft, burglary and two counts of theft of a motor vehicle.

On Feb. 13, deputies received a tip that someone stole a 2011 black-and-silver Yamaha golf cart from the Publix supermarket parking lot in The Villages, according to a Marion County Sheriff's Office report. The cart, valued at $8,300, was decked out with black seats and chrome wheels.

Five days later, officials were alerted about another stolen cart, this time a 2007 Club Car valued at $2,800. It was reported stolen from Chatham Recreation Center.

Deputies learned that the golf cart stolen at Publix was seen on Wednesday in the 9900 block of Southeast 169th Lane.

Deputies arrived at the location and found one of the suspects allegedly trying to sell the cart for $1,500.

The man was taken to the district office for questioning. According to reports, he blamed the other suspect for stealing the cart and that he was trying to sell it.

The other suspect was located and questioned. He apparently told police that he was high during the theft and that the other man gave him the key. 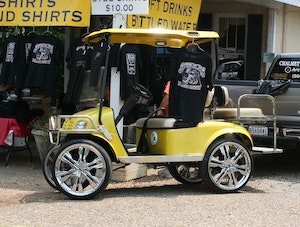 During a search of one of the suspect’s vehicle, sheriff's officials claim they found items reported stolen from a home off Sunset Harbor Road. Reports indicate that $700 worth of items were taken during that burglary.

MCSO detectives claim that both men confessed to burglarizing the home.

The pair was arrested and are now facing multiple charges, including two counts of grand theft of a motor vehicle and grand theft.

The state of Florida takes theft charges quite seriously, and prosecutors will aggressively seek a conviction for those accused of stealing cars. If you have been charged with motor vehicle theft, you need to act quickly and enlist the help of a motor vehicle theft lawyer who can assist you with these complicated charges and build your defense. A motor vehicle can be a car, motorcycle, golf cart, scooter, ATV, trailer or any other type of motorized vehicle.

Following an arrest for any type of criminal offense, you need to take prompt action to make sure that your rights remain protected and that your freedoms are aggressively defended. A Villages Burglary & Theft Attorney at Whittel & Melton can thoroughly investigate your case and work to achieve a favorable outcome for your verdict. We know how stressful these charges can be, but we will do everything in our power to investigate the events leading up to your arrest and challenge any evidence that may have been gathered illegally. If you are under investigation or have been arrested for motor vehicle theft in The Villages or the surrounding areas, please call our office now at 352-369-5334 or fill out our online consultation form.