Police are calling this the biggest grow house bust in the area in recent memory.

The plants were apparently found inside a house at 1185 Singleton Circle, a rental property that was entirely remodeled as a grow operation with no living space inside, according to police.

A Groveland police officer discovered the plants while on routine patrol, according to a press release. She allegedly spotted the door around 10:47 a.m. Sunday and thought the house was being burglarizes. She noted the marijuana plants were in plain view. 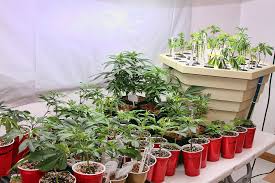 Police claim a search warrant was obtained and the house was searched around 3:30 that afternoon.

The investigation is still underway. No one has been officially charged with a crime at this time.

According to the Drug Enforcement Administration, the state of Florida has more indoor marijuana grow houses than anywhere else in the country. While set up costs and rent for a grow house can be extremely costly, just 50 plants with at least three growing cycles a year can easily gain growers as much as $300,000 a year, authorities claim.

The consequences for cultivating marijuana or operating a grow house are quite serious throughout the state of Florida. Police and prosecutors tend to take a firm stance when it comes to seeking maximum penalties in these cases. A conviction can haunt you well into your future. Anyone charged with growing marijuana, also referred to as cannabis, weed, pot, ganja, chronic, Mary Jane, reefer and hydro, will face mandatory minimum prison sentences of at least three years, steep fines and the very real possibility of a felony criminal record. This means that future employers, schools and even landlords will have access to your criminal record.

If you have been arrested and charged with cultivating marijuana or operating a grow house in The Villages, Bushnell, Tavares, Ocala, Gainesville, Inverness, Orlando, or the surrounding areas, a Villages Criminal Defense Lawyer at Whittel & Melton can make sure your legal rights and best interests are protected. As former prosecutors, we are more than familiar with how law enforcement discovers grow houses and can fight to protect your rights when it comes to illegal search and seizures or other police schemes. Your initial consultation with us is always free, so you have nothing to lose. Call us today at 352-369-5334 to learn how we can help you or contact us online.