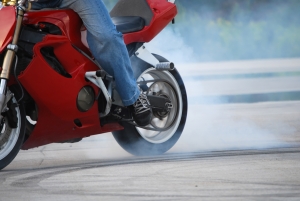 A motorcycle heading south on U.S. 441 was struck from behind by a pickup truck Friday night killing the passenger and seriously injuring the driver.

The driver, a 71-year-old Summerfield man, and the passenger, a 66-year-old Belleview woman, were ejected from the bike onto the southbound shoulder of the highway.

The driver was transported by helicopter to Shands at the University of Florida in Gainesville with serious injuries. The passenger was taken to The Villages Regional Medical Center by ambulance, where she was pronounced dead.

According to officials, the two were not wearing helmets when the accident occurred.

This crash and another in Weirsdale later Friday night has contributed to the 45 traffic fatalities so far this year in Marion County.

Unfortunately, accident injuries to passengers on motorcycles are generally quite severe. Motorcycle passengers place their lives in the hands of the driver when they decide to go for a ride. Unlike passengers in a car, people riding on the back of a motorcycle lack the protection of certain safety features that a car offers such as a steel frame, airbags and seat belts. Even if motorcycle passengers wear helmets, they are still likely to suffer more serious injuries than passengers in other automobiles and stand a greater chance of getting killed.

Depending on the circumstances surrounding the accident, an injured passenger, or the family of a passenger that was killed, may be able to pursue a claim against the driver responsible for the accident. In some cases, the motorcycle operator may be held liable, and other times, a driver of another vehicle may be found negligent. Driver negligence can include driving drunk, driving recklessly, speeding or texting or talking on a cell phone.

Despite the cause of a motorcycle accident, The Villages Motorcycle Accident Attorneys at Whittel & Melton can help you and your loved ones obtain the compensation you need, and deserve. Our top priority is recovering compensation for the losses you and your family have endured as a result of personal injuries or wrongful death in a motorcycle crash. At Whittel & Melton, we can explain your rights to you and outline the process for taking legal action.

If someone you love was injured or killed while riding on the back of a motorcycle in Marion, Lake or Sumter County, or the surrounding area, contact The Villages Motorcycle Accident Attorneys at Whittel & Melton online or call 352-369-5334.