Reportedly, there are thousands of residents in The Villages that are currently on a waiting list to get their golf carts, used as a primary source of transportation, made a little slower.

Why is this? In the state of Florida, dropping a cart’s speed from 25 mph to 20 mph can make a huge difference in the cost of insurance, tag fees and registration costs.

Insuring a street legal vehicle will cost you anywhere from $600 to $900 a year, while insuring a regular golf cart costs around $100.

Many low-speed vehicle owners were less than thrilled when they began experiencing huge price hikes in insurance premiums. However, some relief was found when state Rep. Marlene O’Toole, R-The Villages, sponsored a Florida House bill which allows owners of low-speed vehicles to convert their vehicles to golf-cart speeds of as much as 20 mph.

Sen. Alan Hays sponsored the same bill in the Senate and Gov. Rick Scott signed it into law making it effective as of July 1. 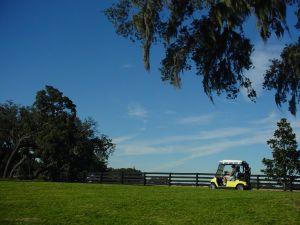 The bill also requires that the LSV owner contact the Florida Department of Highway Safety and Motor Vehicles to verify the conversion.

Now Villagers are eager to make the conversion.

It is estimated that there are more than 50,000 golf carts and LSVs in The Villages. Residents use these vehicles for nearly 80 percent of their trips around the community.

The conversion takes just a few minutes and can cost as little as $40, according to reports.

The cheaper golf-cart rates for LSVs are a huge selling feature for dealerships throughout The Villages area. One dealership owner in Fruitland Park claims that more than 2,000 Villages residents are on his company’s waiting list for the conversion.

With so many residents of The Villages wanting the amenities of a Global Electric Motorcar, a popular LSV, with the convenience of not having to register the vehicle or pay hefty insurance premiums, it is important that LSV owners go through the process of the modification and verification so that there is no risk their cart can exceed more than 20 mph, which could result in trouble for LSV owners.

While residents are ready for the conversion now, the state is simply not ready for the changes. Reports indicate it could be as long as six months before the work can be completed.

According to the Consumer Product Safety Commission, there are more than 10,000 golf cart-related injuries every year requiring emergency room treatment. Most golf cart injuries occur due to rollover crashes or occupant ejections, resulting in traumatic brain injury, head trauma, fractures and even death. It is important to point out that golf carts and LSVs are not equipped to withstand a crash involving another motor vehicle. LSVs and golf carts alike are designed as a low cost, eco-friendly way for residents to travel around larger, gated communities where there is little interaction with larger automobiles. With that said, LSVs travel anywhere between 20-25 mph and do not have airbags or any other safety features beyond seatbelts as they are only intended to be used in low risk settings.

The potential dangers associated with golf cart or LSV accidents are serious, which is why it is always important to maintain a high level of care and focus when operating one of these vehicles. If you or someone you love has been injured in a golf cart or LSV collision in The Villages or any surrounding area, contact a Villages Golf Cart Accident Attorney at Whittel & Melton online or call 352-369-5334 for a free consultation today.