About a week after the State Attorney's Office said it would not file criminal charges against Leesburg City Commissioner Jay Hurley for his involvement in an April crash that killed a motorcyclist, police announced Monday they have ticketed him in the accident.

Hurley, 45, was cited for improper lane change resulting in death and illegal window tint on his front and two side windows, according to reports.

Because a death occurred from the accident, a court date is mandatory for the $168 lane changing infraction that carries a possible $1,000 fine and six-month driver’s license suspension. This decision will be handled by a judge.

The window tint citation, which is a non-moving violation, carries a fine of $116. 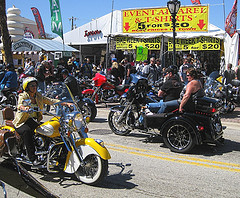 The crash took place April 27 during the last day of this year’s Leesburg Bikefest and in front of Gator Harley-Davidson on U.S. Highway 441.

According to Leesburg police, Hurley was traveling south in a Ford F-150, apparently in the center lane of 441, when he made a quick right turn into Gator Harley-Davidson, crashing his pickup truck into a 1987 Yamaha.

The accident was somewhat controversial due to the fact that Hurley’s account of how it happened conflicted with witnesses. Hurley claimed he was in the right lane, but witnesses said he was in the center lane and that the biker had no time to react before the collision.

However, the State Attorney’s Office announced on Sept. 2 that their decision to not file any vehicular homicide charges was due to the fact that Leesburg police with the assistance of Florida Highway Patrol determined it would have been “impossible for Hurley to have traveled in the right lane, make a right turn and have his truck resting in the position after the crash.”

“Despite any inconsistencies between Mr. Hurley’s statement, the witness statements and physical evidence, the evidence fails to demonstrate a reckless and wanton driving pattern required to prove a charge of vehicular homicide,” according to the memo. “This matter shall be returned to the Leesburg Police (Department) for any civil citations they deem appropriate."

Unsafe lane changes are actually one of the leading causes of motor vehicle accidents. Generally these accidents are caused by a driver speeding, ignoring traffic signals or other drivers, or simply not paying attention. These accidents are usually the result of drivers using cell phones, texting, eating while driving, or failing to check a blind spot before changing into a different lane. Sadly, these accidents can be catastrophic, and as this case shows, even deadly. If you have been involved in an accident caused by an improper lane change, understand that you have the right to take legal action.

Lane change accidents are usually complex cases, and it can be difficult to determine where and when the accident happened. If you were involved in an accident caused by an unsafe lane change, a Villages Auto Accident Injury Lawyer at Whittel & Melton can initiate an immediate investigation into your case. As with all auto accident cases, we act quickly to preserve necessary evidence in your case.