A Sumter County couple is accused of holding an under-age girl down and raping her while the three watched the Disney movie “Frozen.”

A 52-year-old man was arrested Wednesday on charges of sexual battery of a victim between ages 12 and 16. A 32-year-old woman was charged with lewd and lascivious molestation and contempt of court after she allegedly violated an injunction order in the case.

The alleged rape took place in October of last year. The relationship between the couple and the victim is not immediately clear.

According to an arrest affidavit, the victim told police she was with the man and woman watching television in the bedroom of the couple’s Lake Panasoffkee home, when the woman started rubbing her leg. 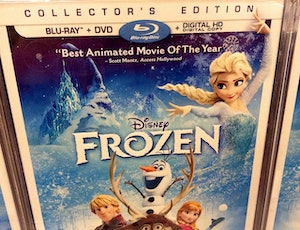 The victim apparently told police the touching made her feel uncomfortable and when she tried to leave the room, the woman grabbed her by the back of the shirt and forced her onto the bed. The woman then allegedly held the girl’s wrists over her head while the man covered her mouth.

The woman is accused of lifting up the girl’s shirt and bra and kissing her as the man removed her pants and raped her.

The girl claims that after the incident, the man threatened her with a gun and said her body would be found in a lake if she told anyone.

The man refused to talk with detectives, according to reports.

Police claim the woman initially denied the allegations, but later told police the three were watching a movie when she left to take a shower. The report adds that when she then came into the bedroom she found the man and the girl having sex, and she kissed the girl.

Both the man and the woman were also charged with false imprisonment. The man has been released from the Sumter County jail after posting a $15,000 bond. The woman remained in jail Friday without bail.

Rape cases are usually complex because of a number of circumstances, including false accusations, media attention and hasty conclusions. If you have been accused of rape, it is very important to obtain legal counsel as soon as possible to ensure your rights and interests are fully protected. Please contact a Villages Sex Crimes Defense Lawyer at Whittel & Melton as soon as police question you so that we can evaluate your case free of charge and plan the best course of action for you.

If you have been accused or charged with rape, or any other sex crime, it is best to invoke your right to counsel. It is never a good idea to investigate or defend your own case. Call a Villages Sex Crimes Attorney today at 352-369-5334 or contact us online to make sure your rights are protected at every stage of your case.