Detectives with the Lake County Sheriff’s Special Investigations Unit responded to 4041 Azalea Way in Lady Lake on Tuesday to investigate a possible meth lab. The investigation resulted in the arrest of four women.

Patrol deputies and investigators with the Department of Children and Families had already been called to the home to investigate a complaint suggesting the children in the home could possibly be at risk of abuse or neglect.

While conducting the initial investigation, patrol deputies took notice of several items that are commonly associated with the use and production of meth. Narcotics deputies were notified shortly after. 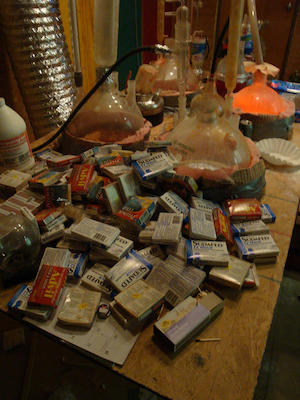 Detectives claim that one of the rooms in the home was being used to produce mushrooms from spores. Lab tests have been ordered to determine whether or not the mushrooms are in fact the illegal type.

DCF investigators who were at the home conducting an investigation removed the two children from the home for placement.

Manufacturing meth is a charge that is taken very seriously by law enforcement and prosecutors in the state of Florida. The dramatic rise in the use and manufacturing of methamphetamine in recent years has led to more severe penalties for those who are convicted of this offense. If you have been charged with manufacturing or possessing meth, it is in your best interest to seek out experienced representation right away so that your rights can be protected.

Whether you have been arrested or charged with any crime related to possessing, distributing or manufacturing methamphetamine, it is vital to the success of your case to contact a Villages Criminal Defense Attorney at Whittel & Melton without delay. The laws and penalties regarding this drug are extremely harsh due to the severe threat the drug places on the community. At Whittel & Melton, we stand ready to help you mount an aggressive defense against any such charges. Please call us today at 352-369-5334 or contact us online for a free consultation.