A 26-year-old convicted registered sex offender who was the center of controversy in Clermont last year after he was given permission to live too close to where children congregate has been sentenced 40 months in prison on a probation violation.

In a Lake County hearing this month, a judge found he violated his probation on his curfew and place of residence, according to the State Attorney’s Office.

The man was sent back behind bars in May after allegedly violating his curfew, according to a Department of Corrections spokeswoman. The spokeswoman claims that the man was charged after it was discovered he failed to remain at his home during his 10 p.m. to 6 a.m. curfew. 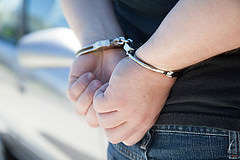 The man was initially sentenced to five years of probation in October 2012 after he pleaded no contest to lewd and lascivious conduct against a minor on accusations of inappropriately touching a girl younger than 16 years old. A Lake County judge ordered the man to register as a sex offender, but signed an order to allow the defendant to live at his parent’s Clermont home on Willow Crest Drive.

However, under state law, the man’s status as a sex offender does not allow him to live within 1,000 feet of a school, child-care facility, park or playground. The city of Clermont has even stricter ordinances — stretching the restriction to 2,500 feet. During a random Clermont police check of registered sex offenders last year, it was discovered the Willow Crest Drive home was only 821 feet from Our House Child Development Center and 698 feet from a community park and pool.

The man was then arrested for violating the state law and released, but remained registered at the same address since he had the judge’s permission. However, this sparked controversy among area residents. The media caught wind of the situation and reported various reasons why the judge had allowed the man to live at the home, including it was best that the defendant stay with his parents and that the man’s attorney had misled the judge on how far the home was from where children would be.

According to Lake County court records, the State Attorney’s Office decided not to prosecute. It is unclear whether or not the judge ordered the man to move. However, according to reports, when the man was arrested on the curfew violation in May, he was a resident of Orange County.

If you are sentenced to register as a sex offender in The Villages or the surrounding area, you not only have to abide by the standard conditions of probation, but you will have to follow special conditions mapped out for sex offenders. These rules can be quite strict and it is very easy to violate the terms of your probation.

Sex offender probation is extremely demanding. A conviction for violating sex offender probation will likely result in a lengthy prison sentence. The courts do not take these violations lightly. With such high stakes, it is of the utmost importance to contact a Villages Criminal Defense Lawyer at Whittel & Melton at 352-369-5334 as quickly as possible to discuss possible legal defenses to the violation or violations in question.