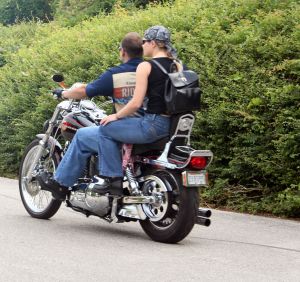 A 49-year-old Clermont woman died Tuesday from injuries she suffered in a motorcycle collision that occurred last week on State Road 44 in Lake County, just east of Eustis.

The woman was riding as passenger on her husband’s motorcycle when his bike crashed into two other motorcycles around 11:35 a.m. on Sept. 22.

According to the Florida Highway Patrol, the woman’s husband was traveling behind another biker who slowed down for a turtle moving across the middle of the driving lane.

The woman’s husband was unable to slow down and slammed into back of the other man’s bike, and then hit the side of a third motorcycle.

The woman was transported by helicopter to Orlando Regional Medical Center where she died.

According to the Centers for Disease Control and Prevention, 10 percent of riders killed in motorcycle crashes in 2010 were women. Additionally, 89 percent of those killed in motorcycle accidents were female passengers. While many motorcycles are designed to carry more than one person safely, every biker and passenger is vulnerable to serious injuries and even death when traffic accidents occur. Liability can belong to anyone who caused or contributed to the accident, so it is important to act fast. There are time constraints placed on when you can file a personal injury or wrongful death claim, and valuable evidence could disappear by waiting too long.

The death of someone close to you is never an easy thing to bear. When someone you love was killed as a result of someone else’s negligence, their death can be even harder to accept. Losing someone you care for not only deprives you of their companionship, but also the means they provide. The Villages Motorcycle Accident Attorneys at Whittel & Melton understand that you are likely experiencing many overwhelming emotions. Unfortunately, it is important to take swift legal action in order to ensure that your family is provided for in the future. Sadly, tragic motorcycle accidents occur every day throughout Central Florida. When you or someone you love is injured or killed because of another person’s reckless behavior, we can help you recover the compensation that you are entitled to.

If you were harmed or someone close to you was killed in a serious motorcycle collision in Lake, Sumter or Marion County, contact The Villages Motorcycle Accident Attorneys at Whittel & Melton online or call 352-369-5334.