Lake County deputies were scouring several neighborhoods Friday night to check for probation violations by registered sex offenders participating in Halloween festivities, but they found no such violators. They did, however, make three arrests.

According to a sheriff’s office spokesman, those arrested included others on probation who lived close to homes of registered sex offenders whom deputies decided to also include in their checks.

Two arrests were made from outstanding warrants - one for dealing in stolen property and one for child support. The third arrest was for drug paraphernalia that deputy’s found on a person. 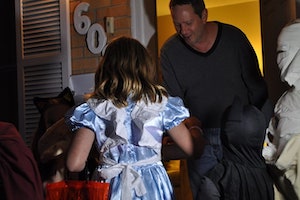 Registered sex offenders are required to notify law enforcement where they live. According to the sheriff’s website, there are 455 sex offenders registered in Lake County.

Friday’s operation focused on those on probation because they are banned from decorating for Halloween, handing out candy or participating in any of the holiday's festivities.

There are a large number of states that have developed laws that restrict the activities of sex offenders on Halloween. The type of restrictions placed on sex offenders during Halloween hours can vary, ranging from "no passing out candy" to "no driving after dark." While these laws are meant to protect children from any threats from former sex offenders and child predators, these Halloween restriction laws can border on infringing an individual's fundamental rights.

Other states prohibit sex offenders from wearing costumes or masks, visiting corn mazes and haunted houses, being on the streets during trick or treating hours and even from leaving their homes at night on Halloween.

In general, the penalty for violating these laws can result in a felony charge punishable by up to three years in prison.

Despite the controversies surrounding Halloween and sex offenders, breaking these laws will result in a criminal penalty. Registered or paroled sex offenders must abide by the laws set in place by their state or local municipality.

If you have been arrested for violating a sex offender law, the best thing you can do is exercise your right to remain silent and contact a Villages Sex Crimes Defense Lawyer at Whittel & Melton as soon as possible by calling 352-369-5334. We are available 24/7 and can help protect your future.