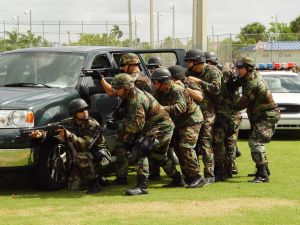 Lake County police killed an innocent man earlier this month after mistaking him for an attempted murder suspect.

They arrived at the man’s Leesburg apartment complex early Sunday morning around 1:30 a.m. and allegedly banged on his door.

The man, who was not expecting any visitors at that time, answered the door armed. The officers apparently believed the man was pointing a gun at them and opened fire killing the 26-year-old pizza deliveryman.

Officers admit they never identified themselves to the man when knocking. They also do not think they did anything wrong.

Police claim they had seen the man suspected of attempted murder in the complex before and that his motorcycle was parked across from the other man’s front door.

Police later arrested two men at a second apartment building. The two are currently being held at the Lake County Jail.

The Florida Department of Law Enforcement is investigating the incident. The officer who shot the wrong man has been placed on administrative leave.

The family of the man killed has hired an attorney, but it is unclear at this point whether a wrongful death suit will be filed.

For the purposes of this case it is important to understand the difference between a “knock warrant” and a “no-knock warrant.” When police use a knock warrant they do not have to identify themselves as law enforcement officers. Technically, officers only have to identify themselves as police when they use a no-knock warrant. A no-knock search warrant allows police to enter a home without knocking, many times resulting in officers using excessive force and kicking down doors. Police typically obtain these warrants in order to preserve evidence before suspects have a chance to hide or destroy it. Officers use no-knock searches as a way to catch suspects off guard in case someone inside the home is armed and dangerous.

Unfortunately, there are many problems with these warrants and as this case shows, officers do not always get the right house. This tragic incident clearly shows what can happen when an innocent person is surprised at his home in the middle of the night by armed men.

When an intentional act or negligence takes the life of a loved one, surviving family members are left to pick up the pieces. The Villages Wrongful Death Lawyers at Whittel & Melton understand the need to see the wrongdoer, whether it be an individual, company or organization held responsible for their actions. We can walk you through the necessary steps in order to secure the financial damages needed after an unanticipated and heartbreaking loss.

If your family has suffered the loss of a loved one due to a wrongful act in Lake, Sumter or Marion County, contact The Villages Wrongful Death Attorneys at Whittel & Melton online or call 352-369-5334.